The Road Ahead For Battlefield 1: Expansions And Celebrations

Battlepacks Have Returned for the Better 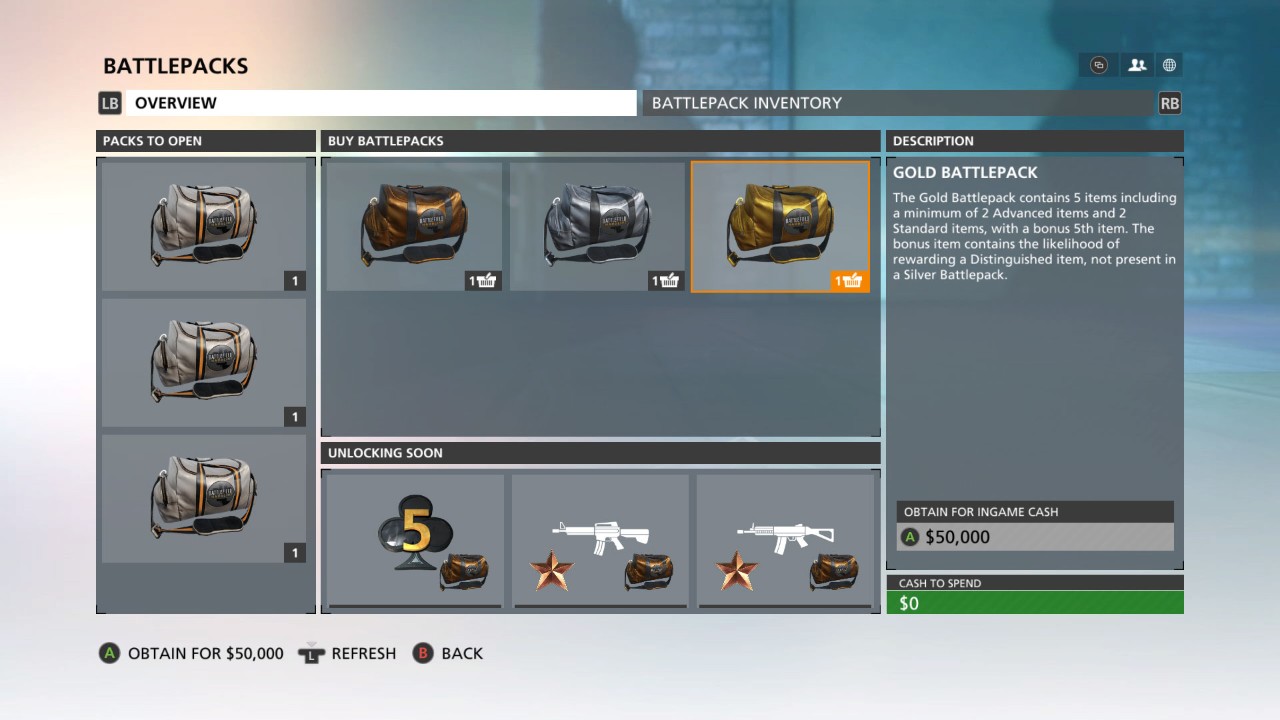 In Battlefield Hardline you’ll see the return of Battlepacks. And we think you’ll enjoy the improvements we’ve made for you.

First a quick breakdown on the Battlepacks themselves. At various milestones in your career, like a Rank-Up, sizable amount of kills with a weapon, or even obtained with in-game Cash, you’ll be able to dig through your newly earned Battlepack for some fun and helpful items. Consider them your duffle bag full of goodies! Inside you can find both cosmetic items like Weapon Skins or emblems for use on Battlelog.com as well as useful items like XP Boosts and Weapon Attachment Vouchers. But those aren’t the only things you’ll find in a Battlepack – once you get your hands on a few you’ll see all the additional items we have in store for you.

Now, with that out of the way we can get down to our changes. Coming out of Battlefield 4 we really wanted to build upon the foundation that was put in place. After you all had started interacting with the system we listened to your feedback, looked at the data, and decided on some important changes. Here are a few examples: 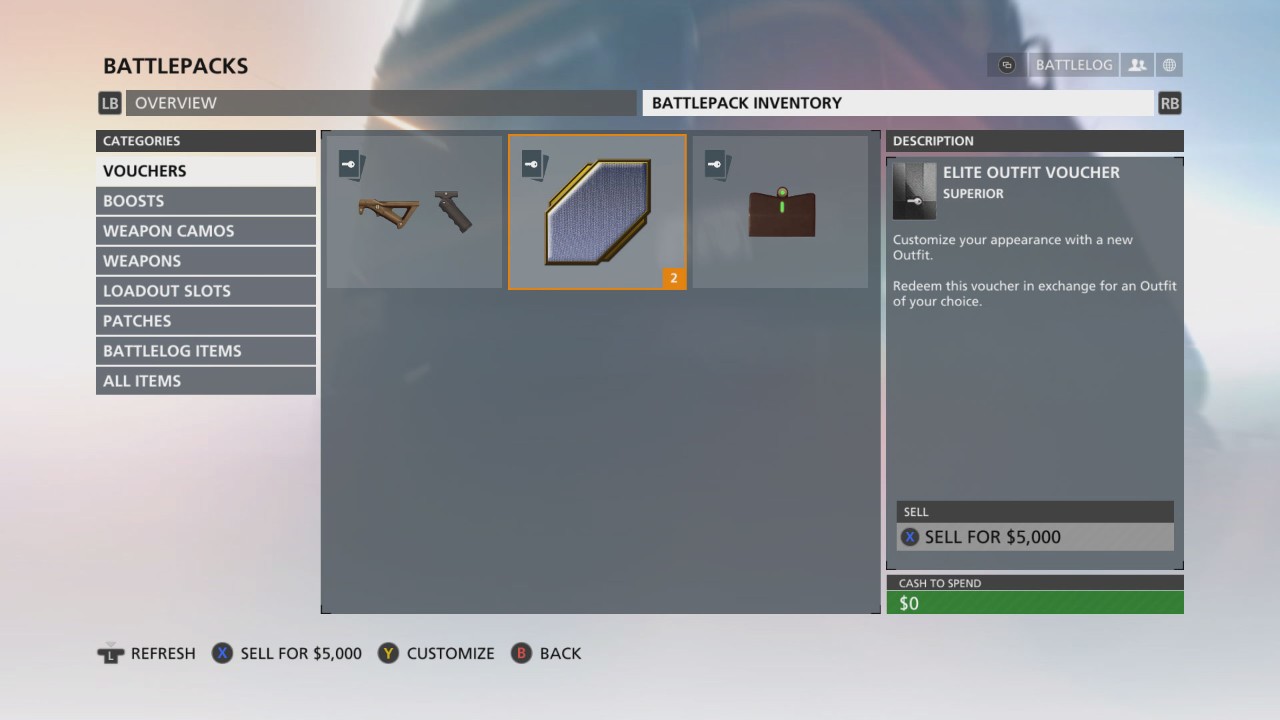 Resellable Items – Have too many Gearhead Boosts in your inventory because you’re not much of a vehicle user? Sell those back for some in-game cash to put towards that new gun you wanted! With the addition to sell back items for a fraction of their value, we’ve given you the opportunity to get rid of unwanted items so that you can focus on the items more important to you as a player. 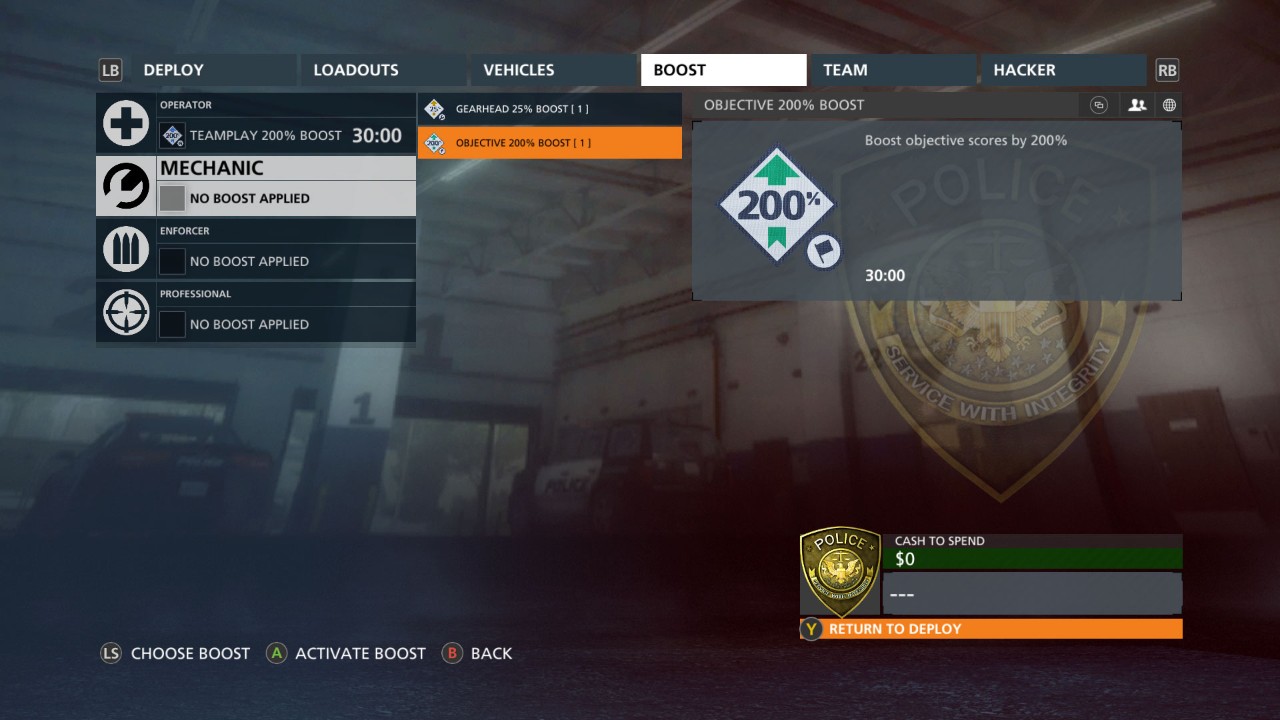 More Diverse Boosts – Speaking of Gearhead Boosts, we’ve introduced a more varied selection of XP Boosts so you can focus on the areas that work well with your playstyle. Perhaps you’re more of a Teamplayer or someone who likes to play the objective rather than go for kills; well we have Boosts for you!

Grindable Battlepacks – In order to give you some more options with your in-game progression, we’ve made the Battlepacks obtainable for in-game cash. This allows you to try for a few of those scopes you wanted in one shot rather than getting them individually. And on top of that, you may just get a nice bonus item in the process! This means as you keep spending time in Hardline, you’ll know that you can always keep trying for those rare melee weapons you’ve been dreaming about.

We hope you like the changes we made. And as a friendly reminder, in case you forgot, you should have a number of Battlepacks already waiting for you open depending on the retail edition you purchased. Check the below on when to expect more.

Thanks for listening. Let us know your feedback so we can continue to tweak things as time goes on.

Bring the heat to your phone or tablet!

Get the Battlelog App for Android

Get the Battlelog App for iOS

The newly improved Battlelog App  – version 2.6.0 – contains all the great features you’re already familiar with if you’ve used it for Battlefield 4. You’ll be able to change your Loadout before deploying in-game, see details of your agent, or analyze detailed reports of your last match. On top of this we also included a Platoon section.

There are a lot of great reasons to download the Battlelog App. Check them all out:

• Loadout: Change your weapons and gadgets before deploying, compare weapons and see loadouts of other players.

• Push notifications: Stay in touch with the latest Battlefield news and get informed when friends starts to play Hardline.

• Leaderboards: See if you are the king of Hardline in your neighborhood.

• Reports: See how you did in your latest game session.

Battlefield Hardline Launch: All You Need to Know

The Battlefield Hardline launch is on. And man, we can’t overemphasize how thrilled we are to share the final thing with you. Letting you throw yourselves into the Cops and Criminals playground that we’ve worked on – and perfected with your feedback – is a true rush.

There may be one or two questions when a game of Battlefield Hardline’s magnitude launches. And no matter what you might be curious about, we want to help you in the right direction. Our prime goal is to make your experience with the game as enjoyable as possible right off the bat.

Below you’ll find pointers on getting in the game, what game modes to try, gadgets and weapons, and links to various support sites. Let us know if there’s anything missing – and welcome to Battlefield Hardline.

When Can I Start Playing Multiplayer?

The servers for Battlefield Hardline will open on different times depending on platform and where you’re located. See below for the full list of times when you can hit the streets:

I’m a Battlefield Rookie – What Game Mode Should I Try First?

Hardline contains both a thrilling single player campaign and the all-out war glory that is Battlefield Multiplayer. If you don’t want to face the heat of multiplayer right away, start with the campaign and familiarize yourself with the controls, try the guns, and earn some Battlepacks.

When you face off in multiplayer, there are seven unique game modes to choose from and we hope you’ll try them all. If you’re unsure where to kick off, you can’t go wrong with Hotwire. If you played the beta you already know about this fast-paced mode, where the cops and criminals fight over a series of marked cars. These rides are basically mobile control points, which you need to take control over. Expect glorious chaos on the streets as the two fractions face off.

And What Class Should I Choose First?

If you’re new to the class system, choose one of the four and try that out for a few matches before switching. Try starting with the Operator class and learn how to keep team mates and yourself alive with the First Aid Packs. Play around with the class-specific guns and gadgets and get a sense of the rock-paper-scissors gameplay foundation that Battlefield rests on.

Any Other Good Beginner Tips? 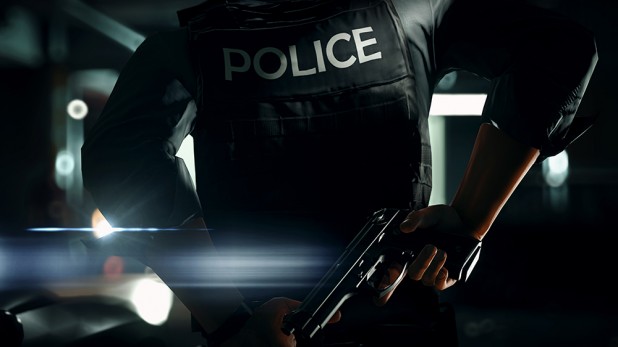 Where Can I Get Game Support? 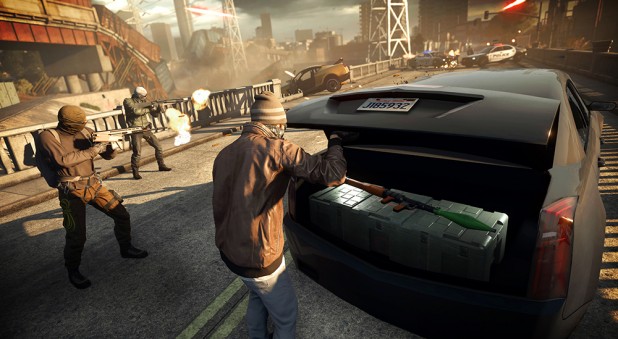 Dev Team Chats
It’s our constant ambition to connect the Battlefield Hardline developer team with the community – before, during and after launch. For the launch days, we’ve set up Twitter Q&A sessions with select members of the Visceral team. This is your chance to ask questions and give feedback to the talents behind Battlefield Hardline – and we really hope you’ll be there. Full schedule for these chats below:

Tips and Tricks: How to Dominate

We’re immensely excited to have you playing the hell out of Battlefield Hardline! To give you a great start with the game, we gathered a few Battlefield Hardline devs who jotted down this list of the 10 most valuable tips when hitting the streets. Browse through these awesome tricks and you’ll be racking up points faster than ever!

General Tips to get Street Smart

The golden rule of Battlefield: concentrate on the objective. An impressive K/D ratio is good and all, but playing each game mode’s objective will always be more rewarding. So get out there, capture the Control Points, cars, and cash!

Don’t forget to Spot enemies. This helps you and your squad see enemy activity on the mini-map, and can be the difference between life and death.

We know you’re anxious to get another piece of the action directly after you’ve been taken down. Spawn on a squad mate to get into the action faster. Be careful though – chances are you’ll spawn right into the heat of a firefight.

If your teams has used the Grapple Hook to quickly get to a better vantage point, remember to interact with the cable to pick up the Hook. This helps cover your tracks so an enemy can’t see that you’ve used it. Conversely, keep an eye out for any Grapple Hooks and Ziplines placed by enemies to learn where they’re at.

In the fast-paced Hotwire mode, use the Mechanic loadout, equip the Repair Tool and ride on the vehicle’s passenger side to crank up the points. You can be top of your team without getting a single kill!

Try to defend the main highway if you’re playing on the vast Dust Bowl map. When you’re trying to out run the enemy, don’t be afraid to get dirty – sometimes your best option is to go off road or through a backyard.

Be a Master of Conquest

Know your surroundings! To master the Dust Bowl map, control the high ground on both ends of the map. Find the Stinger Battle Pickups and take out those pesky choppers. Learn where to place Zip Lines to move between Control Points quickly.

It’s always tempting to capture more Control Points in Conquest mode. However, if your team already has a majority of the Control Points, you should concentrate on defending them and not rushing towards the enemy’s. Don’t spread your defenses too thin!

Pulling off a Heist on the Bank Job map? Criminals should know that there is more than one entrance into the vault – such as the roof. Search the map for additional access points and coordinate with your team on what entrances to open or leave closed. Cops should be quick on their feet and shift position as soon as the drop off location changes.

The Security Room controls the security doors directly outside the vault. Criminals can use the button to close off the easiest route for the cops to assault them.

Want more tips? Get in direct contact with our dev team and shoot them a question on Twitter!